The first monthly gathering of Olympia Satanists was a success.  Here's a brief summary of the meeting:

1. We had milk and cookies.  Two Satanists in attendance were vegan, so they abstained from the milk and cookies, but the possibility of bringing vegan cookies to the next gathering was discussed.  The Satanist who brought the cookies did not drink the milk because he preferred to drink pop with cookies.

2. All of us introduced ourselves and our backgrounds.  Most in attendance were atheists or agnostics.  Most grew up in various Christian traditions.

3. We discussed goals for the groups, and possible Satanic activities we could engage in around town and came up with the following ideas and proposals:

4. Possible slogans and logos to represent the Olympia Satanists were discussed.  The slogan "Dare to Know" was proposed, possibly presented with an image of forbidden fruit.  The image of the State Capitol dome with devilish horns affixed was also proposed.  The Satanists in attendance with artistic abilities indicated that they would consider making a few drawings.

6. One attendee discussed briefly his academic studies of the origin of Satan in the Bible.

7. One attendee discussed her academic work on demonic possession and activity/passivity as it relates to gender.

8. One attendee discussed her experiences at another Satanic meeting in another part of the country.  All attendees agreed that it sounded like fun.

9. The possibility of establishing a Satanic Theocracy was discussed briefly, but dismissed as hopelessly unrealistic.

10. We discussed Satanic rituals for sanctifying people or others that had weakened the cause of the godly, but consensus couldn't be reached.  The lion as a Satanic animal was discussed.

11. Satanic candy-filled eggs were distributed to attendees to be hidden during Unholy Week.

12. People were invited to take the extra cookies home with them.  The two vegan attendees declined the offer as the cookies were made with butter and eggs.
Posted by Worship Satan at 4:34 AM No comments: 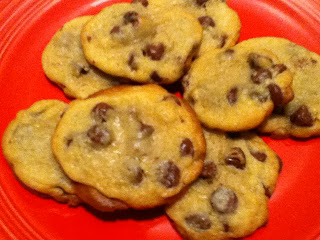 These are the actual cookies we will enjoy at the Gathering of Olympia Satanists.  Come to the Dark Side.  You know you want one...
Posted by Worship Satan at 10:31 PM No comments: 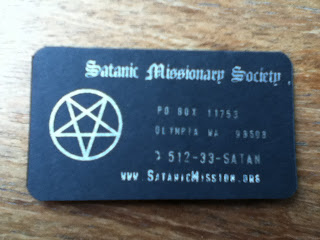 Maybe you've seen these around town. They are individually hand-crafted by our demonic minions.  Some people are afraid to touch them. Others pray to their gods for protection.  Some of the godly tear them to shreds and cast them on the ground.  But we will keep making more.  Take one if you dare...
Posted by Worship Satan at 1:18 PM No comments:

Show your pride and like it. You know you want to...
Posted by Worship Satan at 5:57 PM No comments: 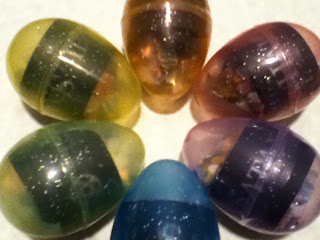 No, Satanists don't generally celebrate Easter, but that doesn't stop us from enjoying candy-filled eggs.
Keep an eye out between April 1, 2012 and April 8, 2012 for an Unholy Week of hunting for Satanic eggs.  (Eggs generously donated by the Satanic Missionary Society)
Satanic Eggs will be hidden around Olympia and The Evergreen State College campus all week by our diabolical minions.
Posted by Worship Satan at 12:13 AM No comments:

Who: Anyone who identifies as a satanist or is curious about satanism

What: A time and place to meet your fellow Satanists and talk about our varied and diverse ways of Satan

Why: You know you want to. We have cookies!

Call 512-33-SATAN or write contact@satanicmission.org for more information
Posted by Worship Satan at 4:59 PM No comments: